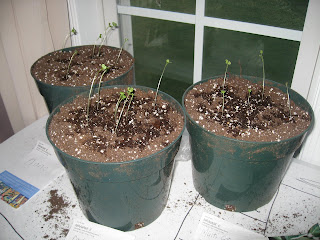 My seventh-grader decided for his science project to grow seeds in different environments. He wanted to do green beans, but in October he forgot to ask his grandfather in West Virginia for some seeds.
So last week, he said he had to get seeds. The project would take two weeks and needed to be done by Thanksgiving.
So we went in search of seeds. That's very hard to do in November.
But Milmont Garden Center in Stuarts Draft came through. They had a few seed packets left, and filled three pots with soil. They even gave us some fertilizer to test how seeds grow with different kinds of fertilizer.
The seeds are growing. Looks like the project will be a success and my son should get a good grade.
And Milmont gets to be the Official Nursery of FishersvilleMike.
They've already received good word from SWACgirl.
Posted by Mike at 12:59 PM