Ace is on fire

A great trio of Obama smackdowns at Ace of Spades today.
The most recent ends with a great line.
As I've always said, it's a false choice to ask if Obama is stupid, or if he is evil; such a question is a distraction from the deeper American value of (dramatic whisper) knowing in our bones that he's both.

That followed this gem.
If you're hoodwinking the public because they're gullible and have a general preference for Symbolic Ciphers over genuine accomplishment and qualification, maybe you should keep quiet and not draw attention to that, rather than confess out loud that your supporters are self-deluded naifs.

Check out the polls and follow Ace's conclusion.
In all objective aspects, about anything that can be quantified and measured, Obama's presidency is a failure. A miserable failure. And a failure producing more and more misery -- persistent, grinding unemployment, skyrocketing gas prices, and soon the bite of inflation -- for more people than any other miserable failure since Jimmy Carter, and quite likely before him, too.
Happy Friday, President Obama. And Saturday's going to be too wet for golf. 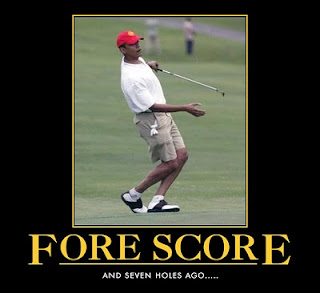