How dare you consider voting against Obama

With Mitt Romney now appearing to be the Republican nominee, the presidential battle is on.
Democrats are awfully touchy about their man.
Anything sets them off.
This cartoon got Blue Virginia riled over the weekend. 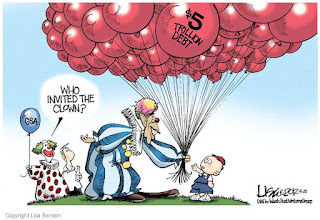 The cartoonist appears to be comparing GSA's wasteful junkets to Obama's overall budget-busting deficit.
But it's not what Blue Virginia and friends saw - they saw an ugly attack on President Obama.
How dare you portray him as a clown?
Ace has the latest from Chris Matthews - obviously the only reason to vote against Obama is you're racist.
It's not disagreeing with policy.
It's not because you're following your beliefs.
It's because you're evil and closed mind.
Poor Democrats. The more they fuss, they more likely Obama's going to get buried under a landslide.
Posted by Mike at 12:27 PM