You're Jerry Jones.
You're proud to have the Super Bowl at your new stadium.
You really wanted the Cowboys to be playing this weekend, but that didn't happen. 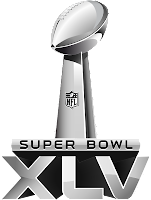 Can you name two worse teams to be at Cowboys Stadium for Super Bowl XLV?
From the AFC you have the Steelers, who beat the Cowboys in two Super Bowls. A fierce rival in the 1970s.
From the NFC you have the Packers. The team that beat Dallas in two NFL title games before the first two Super Bowls. Maybe they aren't the Redskins, but seeing either of these teams celebrate on your field won't feel quite right.
The game and commercials begin at 6:30 p.m. on FOX.
The pregame? Probably started now as you're reading this.
In college basketball, there's a split ACC doubleheader Saturday at 1 p.m. Wake Forest visits Maryland at 1 p.m. on NBC29, while southern areas (and Charlottesville's NBC29) have Clemson at Georgia Tech.
CBS offers either St. John's-UCLA or Illinois at Northwestern Saturday at 1 p.m., then the Big Ten battle between Michigan State and Wisconsin Sunday at 1 p.m.
Comcast's Saturday starts with James Madison hosting VCU at noon before Old Dominion meets George Mason. Then it's off to the Pac-10 at 4 p.m. for Washington taking on Oregon.
The ACC game of the week is Sunday at 2 p.m., with Florida State against North Carolina.
MASN has four Big East games Saturday starting at noon with Providence at Georgetown. Syracuse visits South Florida at 2 p.m., then Cincinnati takes on Pittsburgh at 6 p.m. followed by DePaul at Louisville.
Sunday at noon, Rutgers battles Notre Dame and Marist takes on Niagara at 3 p.m.
It's five games each for ESPN and ESPN2 on Saturday. ESPN starts the day at noon with West Virginia heading to Villanova, then it's Baylor-Texas A&M, Memphis vs. Gonzaga and North Carolina State heading to Duke. The Primetime crew watches Kentucky take on Florida at 9 p.m.
On the deuce, the day begins at noon with Butler vs. Cleveland State and Rhode Island at Temple. Iowa heads to Indiana at 4 p.m., followed by Mississippi against Arkansas and Loyola Marymount at St. Mary's.
Sunday while getting ready for the big game, Ohio State meets Minnesota at 2 p.m. on ESPN.
In women's basketball, MASN has Pittsburgh at West Virginia Saturday at 4 p.m. Comcast goes to the CAA Thursday as Towson visits Drexel at 7 p.m., then offers a pair of games Sunday - N.C. State vs. Maryland at noon and Nebraska facing Colorado at 4 p.m.
ESPN2 has high school basketball Saturday at 10 p.m. with Bishop Gorman meeting Long Beach Poly.
In NBA action, ESPN offers the Celtics hosting Dallas at 8 p.m. followed by Jazz-Nuggets. Sunday on ABC, the Magic visit Boston at 2:30 p.m.
The Wizards have a pair of home games on Comcast this weekend - Friday against the Magic and Saturday against the Hawks.
CBS has the PGA tour from Phoenix Saturday and Sunday at 3 p.m. And don't forget to take out the trash.
The Capitals host the Penguins Sunday at 12:30 p.m. on NBC, after playing at Tampa Bay Friday on Comcast-plus.
Posted by Mike at 6:29 AM