For years, college football has been the tradition on New Year's Day. But with the Bowl Championship Series, several games moved off the traditional day each year as we build up to the national title game.
The past three years, the NHL has stepped into the Jan. 1 breach with its Winter Classic. After stops in Buf 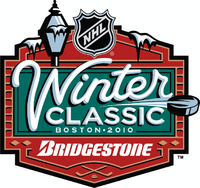 falo and Chicago, this time Boston's Fenway Park hosts the Bruins and Philadelphia Flyers.
The Classic continues to grow with each edition. In Boston this year, there's been a high school game on the ice. There's a college tournament next week, and the people of Boston will have a chance to skate on the ice - unless they decide to sell their free tickets for big bucks.
If the temperatures are in the 30s and the chance of snow arrives,
a cool hockey venue will look even cooler.
New Year's Day gives you five college bowl games - so does New Year's Eve and Jan. 2. I guess that helps you pace yourself.
Three of the New Year's Eve games are on ESPN - local fans will be waiting for Virginia Tech's game with Tennessee in primetime. Before that, it's service academies playing in Texas - Air Force vs. Houston at noon, followed by Navy against Missouri.
CBS shows the Sun Bowl - Stanford vs. Oklahoma - at 2 p.m. while the NFL Network has its bowl telecast - Minnesota vs. Iowa State in the Insight Bowl at 6 p.m.
You can still find the Rose Bowl at its traditional New Year's Day place - Oregon meeting Ohio State at 5 p.m. on ABC. The Sugar Bowl (Florida vs. Cincinnati) is in prime time, but on FOX.
There are three games around midday - highlighted by Bobby Bowden's farewell from Florida State in the Gator Bowl on CBS. ESPN shows the Outback Bowl with Northwestern meeting Auburn, while the Citrus matches Penn State and LSU on ABC.
With no NFL games on Jan. 2, the bowls claim the day. The Cotton Bowl will be on FOX, with Oklahoma State taking on Mississippi. There's the International Bowl from Toronto (South Florida taking on Northern Illinois on ESPN2) and a trio of games on ESPN - South Carolina vs. Connecticut in another pizza bowl at 2 p.m., followed by Arkansas against East Carolina in the Liberty Bowl and Michigan State vs. Texas Tech in San Antonio.
It's the final weekend of the NFL regular season, giving both CBS and FOX the chance to show a pair of contests Sunday afternoon. The Redskins (at Chargers on FOX) and Ravens (at Raiders on CBS) are both on the west coast.
The early games in Fishersville look likely to be Steelers at Dolphins on CBS and Giants at Minnesota on FOX. It will be the Dolphins' first appearance on over-the-air TV, leaving only four teams - Houston, Tennessee, Arizona and Seattle - not seen on Sunday afternoons in our area this season.
NBC has decided to show the Bengals at the Jets as its last game Sunday night. It's the final football game at Giants Stadium, unless the Jets win and as the fifth seed host the sixth-seeded Ravens in the AFC championship. (I'm just anticipating a Ravens' win on Sunday.)
TNT has a doubleheader on New Year's Eve - Heat at Spurs starting at 7 p.m., followed by the Sixers at Clippers. The Wizards host San Antonio Saturday on Comcast.
The Capitals open the new year on the West Coast, facing the L.A. Kings Saturday afternoon.
Comcast closes 2009 with a pair of basketball games - Arizona State vs. UCLA at 4:30 p.m., followed by William & Mary at Maryland. Sunday, the Terps face UNC-Greensboro at 1 p.m. Florida takes on N.C. State at 4 p.m., and the ACC contest of the week matches Clemson and Duke.
ESPN2 shows six games on New Year's Eve - going from noon to midnight. Michigan at Indiana starts the fun, and Duke hosts Penn at 6 p.m.
West Virginia visits Purdue Friday on ESPN, and there's three games on ESPN2 Saturday - Marquette vs. Villanova at 3:30 p.m., followed by Kansas at Temple. Seton Hall comes to Virginia Tech at 8:30 p.m. to cap off the day.
CBS offers two choices early Saturday - Arizona at UCLA or Gonzaga vs. Illinois - prior to showing Kentucky battling Louisville.
In women's basketball, Oklahoma visits Tennessee Sunday night on ESPN2.
Posted by Mike at 11:02 AM