Bill Bolling wants input about whether to mount an independent run for governor in November.
My thought -
Don't.
Don't.
Don't.
It's nice to think you're the independent voice, free of partisan conflict, that could bring solutions to Virginia.
It won't.
You weren't able to get fellow Republicans to hold a primary that could have benefitted your chances. You had seven years in Richmond to make an impact, and it hasn't happened.
Ken Cuccinelli is not a Tea Party flash in the pan. He's been on the job for years, building enthusiasm for his brand of politics. Enough that there will be a convention to nominate Lt. Governor and Attorney General.
With his leading the party, others members running will be as part of his team.
With Bolling in the mix, Republicans are split.
Democrats benefit.
If you're concerned that the Republican party might be heading in the wrong direction, those now in control have been concerned about the past direction. Which is way they are part of the Cuccinelli team.
Stand down, Bill Bolling.
Your statewide chance was 2012.
Mitt Romney didn't win with your backing.
If you couldn't get it done for him, then it's foolish to think Virginians will look well on your independent bid.
You will scrape off just enough Republican support to put Terry McAuliffe in the governor's mansion.
Ewww.
UPDATE: I've got to use a graphic from Bearing Drift. 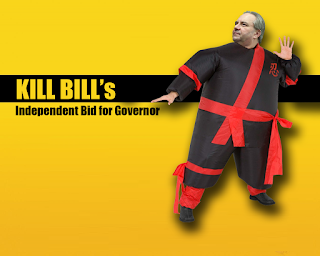