Lessons from the beard

In April, I decided to start growing a beard.
Both of my younger brothers had beards at the time, and I wanted to see how mine would come in.
They both had white beards that made them look like Santa Claus.
Not me.
Areas of grey, but also areas of my natural color.
After a while, I decided to keep it until my beach trip.
I wanted to be the Old Man and the Sea. 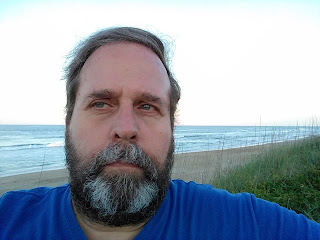 I have had some nice comments on having a beard.
Makes you look more distinguished, like a professor my mom said.
My wife hates it though.
I ask her, how can I make it better.
Shave it off is the reply.
Thus the lesson of the beard answers the question about why President Trump tweets as he does.
He likes it.
It's a part of him.
Would a trim of his Twitter output satisfy his foes?
No.
Cut the whole thing off.
Like Samson and his hair, Trump feels he gains power from his tweets.
His thoughts are there for his supporters and opponents to see.
Trump wouldn't be Trump without his twitter feed.
I don't look for Trump to trim his twitter anytime soon.
After today's WrestleMania tweet, I hope it's obvious where he stands on the matter.
He's the President and you're not.
But like a showman, how's he going to top this tweet?
Posted by Mike at 8:46 PM