For your holiday weekend, spend some days at Centre Court. 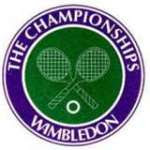 NBC has two days of "Breakfast at Wimbledon," with the women's final Saturday at 9 a.m. and the men going for their title Sunday at 9 a.m.
Getting down to the final two, there's lunch at Wimbledon Friday at noon for a men's semifinal. ESPN2 has live coverage starting at 7 a.m.
Fourth of July weekend means NASCAR returns to Daytona. TNT has the race Saturday at 7:30 p.m. The Nationwide racers hit the track Friday at 7:30 p.m.

It's the final weekend of interleague play in baseball, so we get Yankees vs. Mets Saturday on FOX and Sunday afternoon on TBS. Fox also shows the Cubs vs. White Sox and Indians-Reds, while the ESPN Sunday night contest matches the Dodgers and Angels.

The Orioles head to Atlanta for the weekend on MASN, while the Nationals take on Pittsburgh in a four-game series, with a doubleheader Saturday on MASN2.

The PGA tour is just outside of Philly this weekend, with CBS covering the AT&T National Saturday and Sunday starting at 3 p.m.

Pool play continues in the Women's World Cup from Germany. Friday on ESPN, Japan plays Mexico at 8:45 a.m. and it's New Zealand against England at noon. The United States women go for their second win of the tournament against Colombia Saturday at 11:30 a.m., then Brazil meets Norway at noon Sunday.
ESPN2 has the early weekend games, with North Korea facing Sweden at 7:45 a.m. Saturday and Australia-Equatorial Guinea.

For more soccer, the Under-17 World Cup is in Mexico. ESPN2 has the quarterfinals Sunday starting at 3 p.m.

The MLS is on ESPN2 Saturday as New York visits San Jose at 10:30 p.m. Sunday, Houston takes on Colorado at 9 p.m.

In France, the Tour de France gets underway Saturday. Versus has live coverage Saturday and Sunday starting at 8 a.m.
Posted by Mike at 6:22 AM