Time for the boys of summer

The Appalachian League baseball season gets underway this week. I got to cover the league for seven years, watching players begin their professional careers under the watchful eyes of former big league players.
In 1989, I got to meet Chet Nichols - the 1951 National League ERA champion. His career didn't sparkle much after that rookie season, but he returned to baseball to teach the younger generation after a career in banking.
Cool photo of his baseball card from Wikipedia. 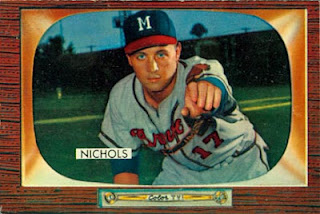